ABOUT US
The Cinema Club shows quality Canadian and International films that would not otherwise be available in our area. Movies are provided by Film Circuit, a division of  TIFF, Toronto International Film Festival. The Collingwood Cinema Club began in 1996-97 and is now one of the largest and most successful film clubs in Canada. It is a non-profit organization run by volunteers. Each year funds are donated to Georgian Triangle Hospice and when possible, Collingwood General and Marine Hospital.

In Dec. 2020, during the Covid year, a cheque for
$15 000 was  presented to Hospice by the Directors and Volunteers of the Cinema Club. A further donation of $15 000 was also given to The Collingwood G & M Hospital at the same time.

Over the last 17 years the Cinema Club has donated over $650,000 to Hospice.In 2014, Hospice Georgian Triangle completed the new six bed Campbell House for palliative care. Collingwood Cinema Club donated $60,000 to their building fund in May 2014.  Campbell House has expanded its premises, with an additional four residential suites, day program rooms and family kitchen opened in April 2017.  The day program rooms, called the Georgian Bay Room and Lighthouse Room have been designated in honour of the Collingwood Cinema Club in recognition of the Club’s generous, ongoing support.

Thanks to the generous donations and support of Cinema Club subscribers who have donated thousands of dollars through their applications to Hospice, above the donations made by the Cinema Club itself. 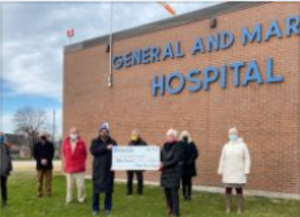 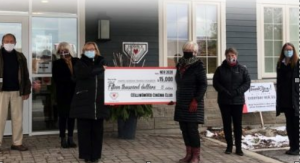